Superloko is a store offering household products, items for children, and accessories for interiors and gardens – all being sold on the German market.

See how we increased the organic traffic to the .de domain by more than 460%.

Superloko store is managed with IAI CMS, which works well in terms of SEO but still has some limitations in its basic version. We started the cooperation at the beginning of 2018. In August, before it all began, organic traffic (according to the data from Google Search Console) equalled 64, with the website being displayed 362 times in the search results. It basically meant that we had a difficult target upon us – to build the visibility of the store almost from scratch.

A few facts for starters:

When we work with online stores, we usually suggest the best possible approach to SEO: a broad-based one. This time was no different. Broad SEO basically means focusing on multi-word, more popular phrases since they offer a lot more possibilities, especially at the beginning. More specific keywords are searched by the users when they know exactly what they are looking for, which is usually hard to tell at this stage.

After 6 months of cooperation, we have already been monitoring 232 relevant phrases for the website.

Problem no. 1: The lack of analytical tools

From the very beginning, the fact that there was no analytical tool implemented (such as Google Analytics or Google Search Console) was a big issue. In order to perform an audit and plan further activities, we started the cooperation from implementing, verifying and setting up the necessary tools.

Problem no. 2: All metadata was available in Polish

Superloko has a truly multistore approach and a few stores focusing on different markets. For all the sites, meta tags were copied automatically from the Polish version of the store.

It means that the available metadata featured the Polish domain (spokoloko.net) and caused some confusions among the users.

The details of the domain in the search engine results page before optimisation: 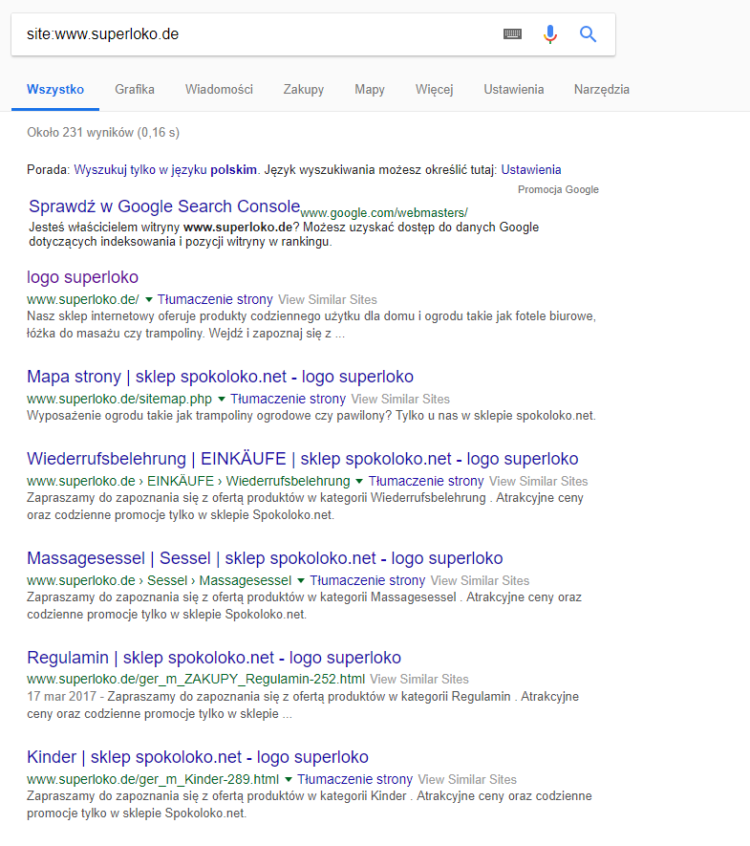 And the results after optimisation: 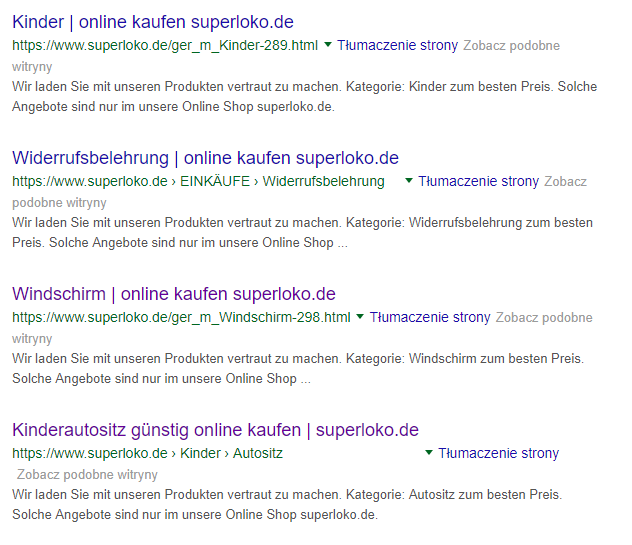 For the domain .de, we set up global metadata, which was assigned automatically, according to a pattern:

Because of the incorrect metadata, the phrase “Superloko” initially scored the 2nd in the search results. After the optimisation, however, it finally ranked the 1st.

Problem no. 3: The lack of security certificates

At the start of the cooperation, the site didn’t have the SSL certificate implemented, which also affected its visibility in the search engine.

We supported the client during the implementation and advised on how to do it properly. Afterwards, we added the new addresses to Google Analytics and Google Search Console.

The next certificate that we recommended was the one called “Trusted Shop”, which makes a difference for the customers in terms of their trust, especially in Germany.

In the beginning, there was no content on the website. Google clearly likes content – especially a unique one. That’s why we started adding relevant content and have been doing it ever since, taking into account the right text formatting and its structure.

We have already added the content on the homepage and the majority of categories.

After adding the text on the homepage in the middle of December, the phrase „gartengeräte online kaufen” started to rank higher.

Then, after adding content to the category “coffee tables”, the phrase also started to gain more visibility:

Problem no. 5: No product optimisation

The lack of product optimisation was challenging for building the site’s visibility. The products often had the wrong names and descriptions, the titles didn’t match suitable keywords, and sometimes there were no searches for the given names at all. Simply because, for example, the products were named “bicycle of red colour” instead of “red bicycle”, which happens to be searched much more often.

The changes in the names were automatically “noticed” by the IAI CMS, and therefore, the URL changed automatically. If we had worked with a different CMS, we would have had to modify all URLs manually.

The results of the analysis performed by Page Speed Insight were low. In order to make it better, we reduced the size of the images.

The effect? See it for yourself!

The results before optimisation:

The results after optimisation:

Right from when the cooperation started, we’ve been regularly taking care of link building that drives traffic to the domain: 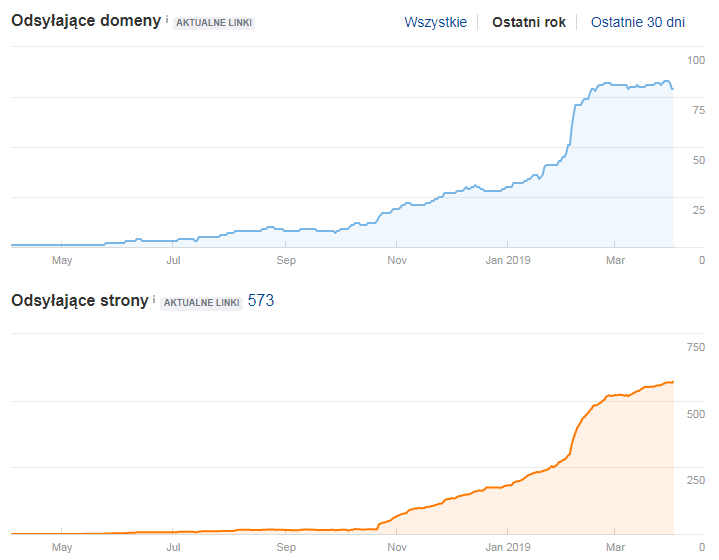 The analysis from Ahrefs before the start of the cooperation:

The analysis from Ahrefs after 6 months of cooperation:

Optimizing for a german market always comes with great challenges. First of all, German customers don’t trust products that come from foreign countries. Also, they are reluctant to buy from stores that don’t have reviews or proper certifications. This makes building authority around the website a base for SEO strategy on a DE market. In the case of Superloko, we also had to face high competition from eBay and Amazon companies. We needed to carefully choose adequate keywords to optimize for.

A Case Study of a link building process for Polish, Finnish, Swedish and Danish markets we're carrying out for the CBD industry client. See how we introduced most relevant keywords to TOP1.